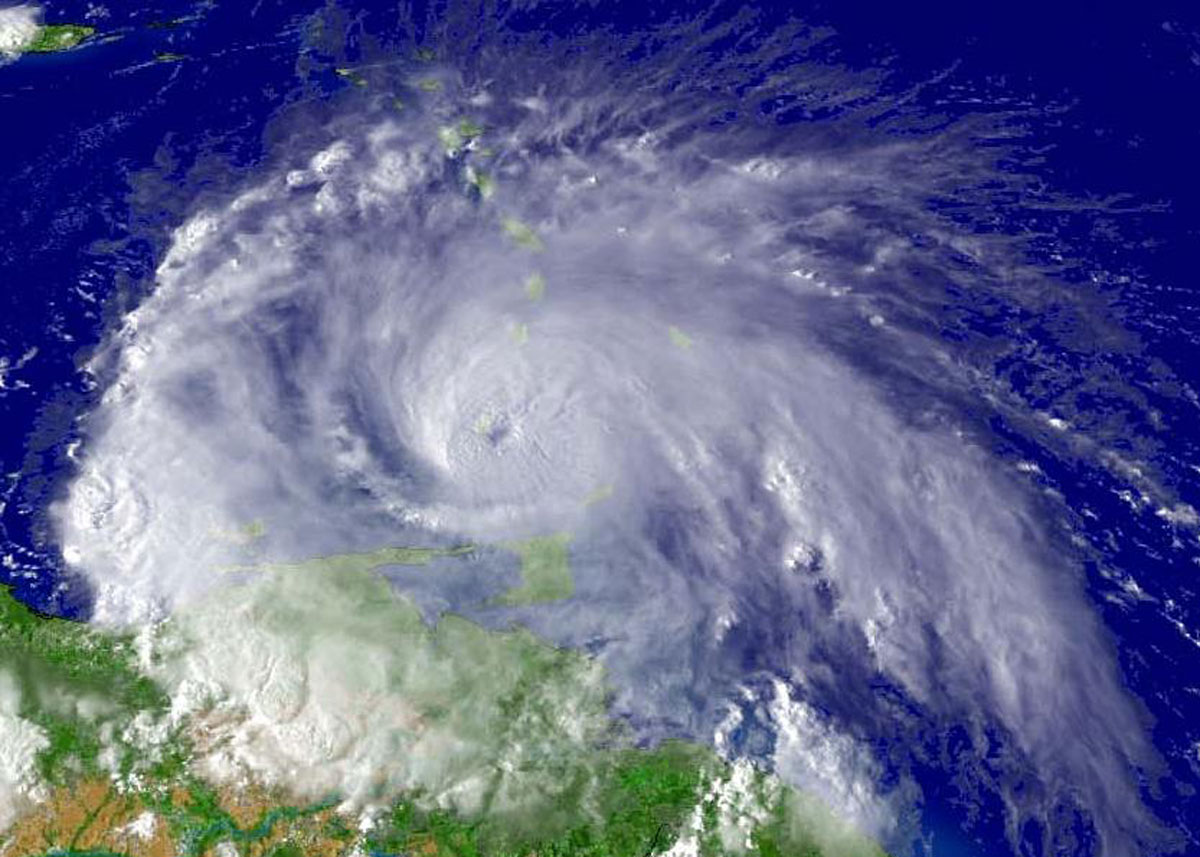 A map of the Caribbean highlighting the location of Grenada. 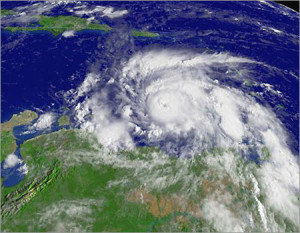 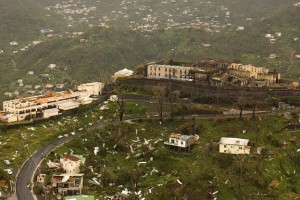 Island wide devastation in the aftermath of the Hurricane Ivan. 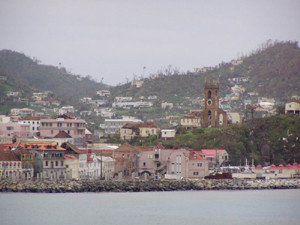 Island wide devastation in the aftermath of the Hurricane Ivan.

Grenada, a volcanic island of 90,000 people that is a major producer of nutmeg, cloves and other spices, was was struck by Hurricane Ivan on Tuesday 7th September 2004. It was one of the worst hurricanes to hit the West Indies in 10 years.

The call came from the Barbados Defence Force operating in Grenada as part of the Eastern Caribbean Regional Security System (RSS).  This Regional Security Force had been seeking to help bring the Grenada internal security situation under control where post Hurricane Ivan a dusk-to-dawn curfew was put into effect, however, lack of effective radio communications was hampering progress.

Within 24 hours of receiving the call, Mobile and Marine Services, had in place in Grenada a working solution using Tait Portable Repeaters, Tait Mobile Radio Base Stations and Tait Orca Portable Handheld Radios, which provided the emergency backbone for island wide communications for the Grenada Police Force, helping bring order to the country in the aftermath of this disaster.

On Tuesday 7th September 2004 when Hurricane Ivan slammed into Grenada it caused structural damage to approximately 90 percent of the country’s homes and to nearly every major building in the Grenadian capital of Saint George’s, cut power lines and took out all the island’s communication links.

Ivan was a category 3 hurricane on the Saffir-Simpson scale when it passed by Barbados, St. Lucia, St. Vincent and the Grenadines, and Trinidad and Tobago on Tuesday.   Ivan then strengthened into a category 4 hurricane as it hit Grenada on Tuesday evening, bringing sustained winds of 220 km/h.

The International Federation of the Red Cross stated at the time that at least 17 people died, approximately 60,000 people were made homeless with 5,000 to 8,000 persons in 47 emergency shelters, 30 of which are official shelters and 17 of which were established on an ad-hoc basis.  Also among the damaged buildings was the Grenada Red Cross Society headquarters.

Prime Minister Dr. Keith Mitchell told BBC Radio: “We have got a tremendous hit that we never expected – you are talking hundreds of millions of dollars of damage. We have declared the country a national disaster, contacted our international friends and indicated that”…  “I am pretty sure we have taken a tremendous hit in the nutmeg industry, which is a key barometer of our economic development”, he added.

Here is a personal account of the Tait emergency radio solutions installed in Grenada post Hurricane Ivan, taken from a situation report filed by one of Mobile and Marine Services on-the-ground team:

On Tuesday 7th September 2004 Hurricane Ivan hit Grenada and for nearly 12 hours the island was subjected to storm force winds in excess of 220 km/h.  When it was all over the following morning the “Spice Island” was devastated.

After discussing the requirements we decided to use a Tait T800II Portable Repeater and a mixture of Tait T2015 Mobile Radio Base Stations and Tait Orca T3000 / T5000 portable handheld radios.  The radios were programmed with the repeater and a number of simplex channels and Marine VHF channels.

By next morning we had the equipment ready to go, however, getting transport into Grenada proved to be a problem.  Point Salines International Airport was officially closed to traffic as the control tower had sustained damage.

I finally hitched a ride on a US Coastguard flight around 2pm on Thursday 9th of September 2004 ( two days after the hurricane had hit Grenada).  The plane was loaded to maximum with equipment and 5 passengers who were part of an international assessment team.

On the 40 minute flight down to Grenada there was the usual talk with each of us telling what our area of interest was.  However, as the plane banked over the Southern part of Grenada all conversation ceased as the size of the damage to the island became apparent.

Once on the ground the plane was quickly unloaded and our communication equipment was stacked on the tarmac while the plane turned around.  It was very apparent I was now on my own.

I managed to find someone from the Grenada Police Force and he arranged for an open truck to carry me to the Fort George Police Headquarters.  The drive from the Airport was very slow due to fallen trees, poles and debris from roofs.  The pictures do not tell the story of the destruction.  No building seems to have escaped some form of damage.

After about 90 minutes we arrived at Fort George Police Headquarters.  A 5 mile journey that normally takes 10 to 15 minutes.  Fort George is the site of a 200 year old fort.  It is on a 200 meter high hill overlooking the capital, St. George’s.  The Police station which has a concrete roof had generally remained intact albeit most of its windows were missing.  On arrival I found that the Grenada Police Force had lost all their communication systems in the Hurricane.

Having set up the Tait T800II Portable Repeater, Mobile Handhelds Radios were quickly passed out to patrols on-the-ground.

I then returned to Point Salines where I set up a Tait T2015 Mobile Radio Base Station this time using a car battery as the power source.

The next day, Friday 10th of September 204, I set up another Tait T2015 Mobile Radio Base Station at Point Salines International Airport, together with a HF transceiver to communicate outside the island.  The latter consisted of an Icom  IC-707 and an  AT-130E Automatic Tuner which was connected to a long wire antenna stretched from a flag pole to the Airport building.  I also returned to Fort George Police Headquarters where I moved the Tait T800II Portable Repeater into a secure room and repositioned the antenna to the highest point at Fort George.

In emergency situations like the aftermath of Hurricane Ivan in Grenada the Tait T800II Portable Repeater is a logical choice.  It is light.  It is robust.  It is water proof.  And, the internal batteries make it a self contained unit.  All that is needed is an antenna and a length of coaxial cable to connect it to the N-Type connector on the top of the unit.  Another advantage is that it can be used as a base station as well, which under emergency conditions free up scarce portable radios for use in the field.

Even though this Tait equipment was handled very roughly on its journey from Barbados to Grenada and on the trip from the airport where it travelled in the back of an open truck, it has performed with out a hitch.

The Hurricane Ivan disaster in Grenada has proved, as if we did not already know it, that despite all of the hype about modern technology nothing can replace a basic repeater system.  When I arrived in Grenada there was little operational communications.  Two of the cell phones suppliers were totally off the air and the third had very limited coverage.  The few cell sites that were still standing were quickly overloaded and getting through was very sporadic.  A few satellite phones were brought in, but as soon as their batteries went dead that was the end.

The Barbados Defence Force and Mobile and Marine Services initially operated the Tait T2015 Mobile Radio Base Stations using car batteries until a generator could be obtained.  Likewise the chargers for the Tait T3000 / T5000 Portable Handheld radios were also powered from a number of salvaged car batteries which were readily available from vehicles wrecked by falling trees.  The internal battery in the Tait T800II Repeater operated for over 24 hours and is ideal for emergency situations.

Postscript: The Eastern Caribbean Regional Security System (RSS) Force in Grenada departed on the 15th of December 2004.  The operation was very successful in  maintaining law and order, delivering and controlling relief supplies and repairing or rebuilding critically damaged infrastructure.  This has been a good example of where the people of the Eastern Caribbean came together to help a neighbour in a time of dire crisis.

The Tait repeater played a very important part in this operation and proved to be very reliable over the time it was in operation.  The Tait T800 portable Repeater system kept the RSS control base at Point Salines in contact with units across the Southern area of Grenada.

I visited Grenada again during the first week in December 2004 and was pleased to see the rate of reconstruction that had taken place.  Electricity and telephones were back up as were the cell phones.  The tourist industry still needs a lot of rebuilding but most hoteliers are taking this chance to improve their operation. When they are fully reopened in the middle of 2005,  Grenada will a very modern hotel plant which will rival any in the Caribbean.

Click here to see how Mobile and Marine Services has set up a trailer based mobile repeater for the Barbados National Cultural Foundation, which is also held in reserve as part of the island’s Disaster Management / Emergency Relief plan.  The base system comprises of a trailer with a tilt over telescoping 7-meter mast, a battery box, a 19 inch rack containing a Tait T800II repeater, a Tait T2015 with a Tait T2000-80 line interface board and a solar array panel.

Mobile and Marine Services provide a comprehensive range of professional pmr services and radio systems integration. Backed by more than 40 years of experience enables Mobile and Marine Services to come up with solutions that incorporate 2 or more equipment suppliers in ways that other dealers may not think of. Many of our customers have come to rely on these solutions.

If you have questions, simply need more information, or, need to discuss specific requirements, please click on the Contact MMS to e-mail us.